Conquering Mount Batolusong is not an easy task, Pinoy Trails contributor and a Diabetes Warrior Penchie Limbo shares her journey towards the top of the mountain. 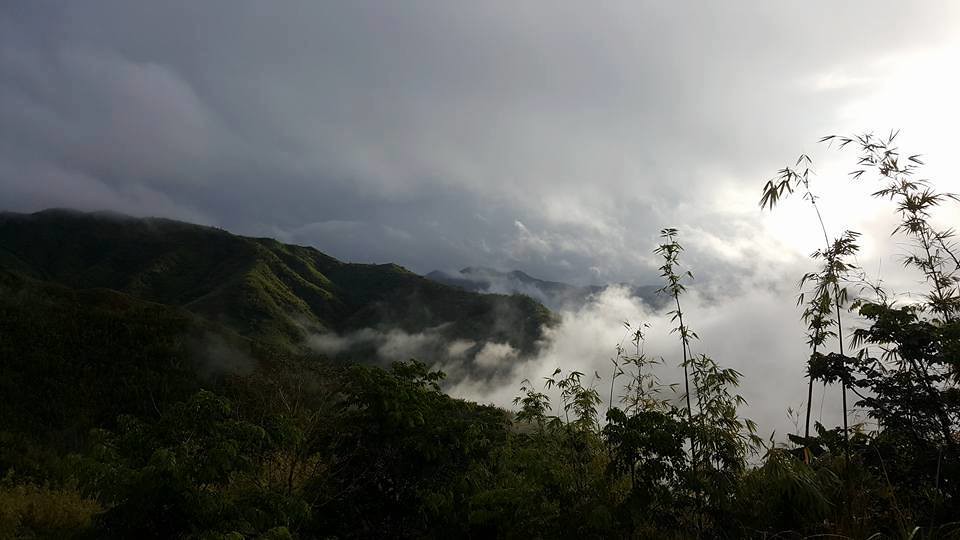 I contemplated on running off-road for a while, but never had the chance to actually join an event. However, last April 9, 2017, I finally had a taste of what trail running was and had a jaunt to the countryside that is San Andres, Tanay, Rizal. It was not my first out-of-town event, but the idea of combining running and mountain climbing in this one event thrilled me. I must admit that I had a few mileage under my belt when I joined, but boy did I prepare intensively to conquer Mt. Batolusong! I had to tweak my training regimen a little bit for the trail run.

My friend Ysa who is an experienced trail runner, who had run Mt. Batolusong once warned me that it is a challenging trail. Technical was the actual term, which meant that there will be unending ascents and steep downhills. She also gave a picturesque description of the view on top which made me wish April 9 would come sooner so I could see and experience everything she described.

The organizers provided basically everything we need to know about the out-of-town event such as the map outlining the trail and hydration stations, the instructions on how to reach the event venue and even suggested cheap shuttle service for commuting participants. However, my friends and I opted to rent a car to shuttle us to and from the event. Comfort was our priority since the ride going to the event was going to take a few hours, 2 hours or so, from Sucat, Paranaque. Renting a private car was more expensive than the shuttle service, but we made the right choice. It was worth the money spent.

Meet up at McDonalds

Pickup time at McDonald’s Taft MRT station was 11 p.m. At that hour, EDSA was abuzz with commuters waiting to get a bus or jeepney ride home or somewhere else. We were not able to indulge ourselves with hot coffee nor a hot meal as the car was already there and we needed to pick up one more passenger at a gasoline station along EDSA-Ayala. The ride going to San Andres was pleasant, albeit a little traffic somewhere in Cubao slowed us down a bit. Past the area of congestion, the ride was smooth. I was able to enjoy looking at the city lights below as it was an uphill ride up to San Andres.

It started to drizzle when we left Pasay City and still drizzling when we arrived around 1 a.m. at San Andres Barangay Hall where the organizers set up their command center and the Start and Finish lines. By the time we arrived at the venue, the 80k runners just kicked off. We were not able to see them off though. 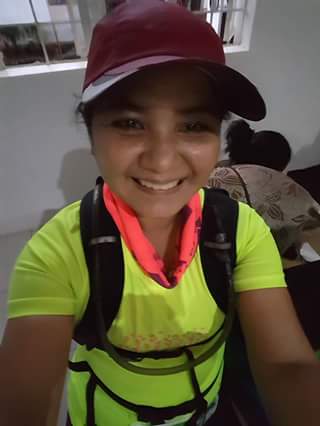 There were no McDo, Jollibee or convenience stores in the vicinity of the venue so we settled to warm and fill our tummies with meals sold from a nearby sari-sari store. Once we had our fill, we rested inside the car and tried to get a brief shut-eye before we toe in the starting line. I wasn’t able to sleep so as my other companions except Rose who slept soundly as if she was in her own bed. I sat beside Rose inside the car and listened to the sound of pouring rain eyes closed but sleep was just so elusive at that time. The rain calmed me though and made me feel relaxed despite my lack of sleep.

The drizzle became a downpour by the time the 50k runners kicked off at 3 a.m. and the 25k runners at 5 a.m. Rose and I prayed the rain will stop by 6 a.m. in time for our kick off. We signed up for the 12k run. We were worried that we would trip along the trail since we did not bring any head lamps to light our way as we expected it will be sunrise by 6 a.m. Our anxiety vanished when the rain stopped and the sun started to show.

We toed in the starting line at exactly 6 a.m. and started to run at first on a relatively smooth terrain, a bit graveled, coarser as we ran farther. By about 500 meters from the starting line, the terrain started to change. We came across a very shallow and rocky stream, then we started our ascent.

There were a variety of trees and shrubs along the trail where it became rockier. The mud started to stick to my shoes, which were not really trail shoes. I was wearing my trusted on-road running shoes hoping they were going to provide enough traction to keep me from slipping. I managed to trek the muddy terrain with my feet getting heavier every step as the mud accumulated under my shoes. 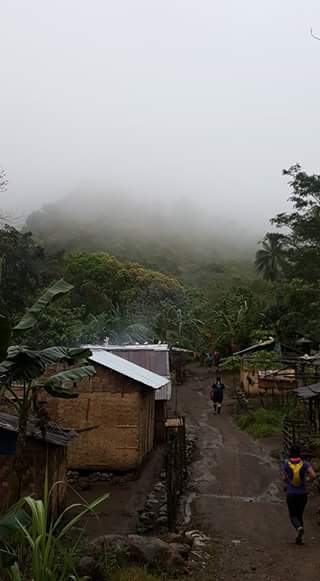 So this was “technical” ascent meant. I felt I would gain wings when I reached the summit, our turn about point. The trek uphill seemed endless and heading towards the sky as it was very inclined. My chin and knee would almost touch every step up. After a kilometer or two of the killer ascent, we could already see a sea of clouds around us.

We were not even at the top yet, but we could already see clouds and lush greens around us. This made me forget how arduous the climb was! I couldn’t help myself, but take a quick selfie to capture the beauty of the nature. By this time, some runners had started their descent. Not quite sure if they were from the 80k or 50k pack of runners who ran ahead of us earlier. A few more hilly climbs and near missteps and falls, we got to a place where there was a rock formation about 10 or 12 feet high. 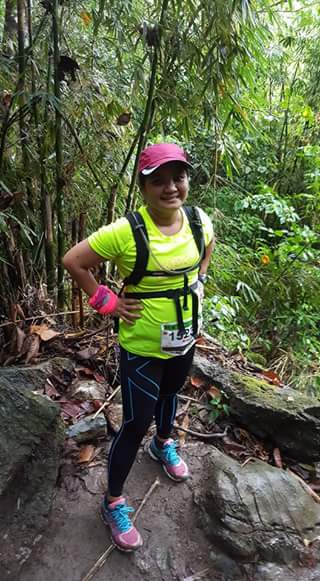 Top of the Rock

Rose and I went up to the top of the rock and had our selfies there. 🙂 I think everyone who passed by this rock formation had a selfie or two before continuing to run ahead. Once we were satisfied with our selfies, we continued to walk up a few meters where we finally found a breezy grassland. We ran further and we reached the hydration station where we ate biko, Jelly Ace, and chocolates, and drank water. Before we headed off and continued to run toward the turn about point which is the summit, we stuffed our pockets with jelly and chocolates and refilled our hydration packs. 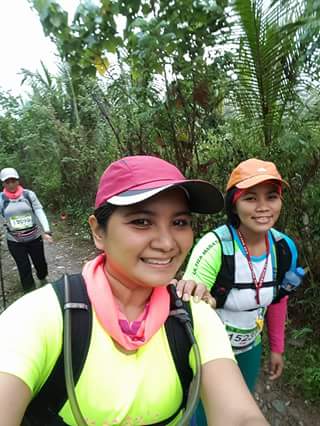 I was able to finally properly run through the grassy field hoping to reach the top quickly. The sun was starting to scorch my neck. A runner descending from the hill encouraged us to tread on as the turn about point was just about a kilometer away. It was not the hill that we were seeing, but behind that hill! Okay, we’ve gone this far, there is no turning back, so we foot slogged our way to the next hill. It seemed that the trail kept on changing and it was never the same. 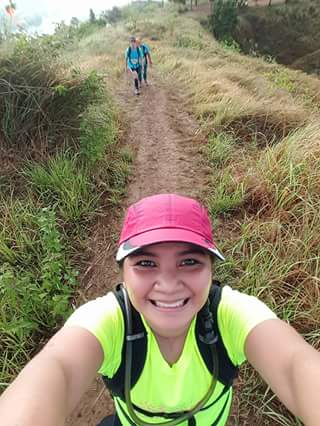 The trail now became more slippery, narrower, and still muddy even if the rain had stopped hours ago and the sun was scorching. A few meters away, the trail became very rocky that we had to climb on boulders and hold on to anything that we can support ourselves to keep us from slipping and falling. We passed by bamboo trees and trekked on narrow trails with head-high shrubs.

By the time, I passed through this trail, I was all alone and fear crept as I slowly and carefully ran through the thick and tall grass and shrubs. I was afraid a snake would pop out any minute. Past this trail, we reached the steepest part and probably the most rocky and slippery. We had to yield to runners descending as the trail was also very narrow with sharp rocks. Nothing much to hold on to but the boulders or any abutting root you could find.

About 20 meters from that area, we started to climb to the top, the summit, the turn about point. I forgot how tired I was when I realized that we were surrounded by mountains. The thick fog prevented us to see the grandeur of the place, but the view was breathtaking nevertheless.

Rose and I spent a few minutes at the summit desperately wanting to take a picture of us there. Unfortunately, our cellphones were all dead, so we just enjoyed the view before we started our descent back to where we started. The cut-off time for the 12k trail run was 4 hours. The ascent took us about 2 hours.

The run downhill was technical, but we made the downhill run faster than we did our ascent. I told Rose we needed to be mindful of the time lest we will miss the cut-off time. I reckoned we had made lots of selfies and carried enough memories with us of the breathtaking view of the mountains and the lush scenery around us, it was time to beat the clock. Aided by the momentum going downhill and with less stopovers, we ran strong and finished in less than 4 hours. Rose finished about 5 minutes ahead of me.

I reached the finish line with a little bruise on my left knee when I lost my footing on a rock and slipped. Except for that very “small” accident, I was okay. I was just hungry as our last meal was about 8 hours or so ago. Food and drink awaited us at the finisher’s line. I grabbed my share before I got my medal and finisher’s shirt making sure I had food and drink! Refueling and re-hydrating were my priority when I finished.

Mt. Batolusong probably was a technically difficult trail for a newbie trail runner like me, but it was just my first time, and I survived it. Definitely, this will not be my last, but more trail runs to come! Happy trail running! 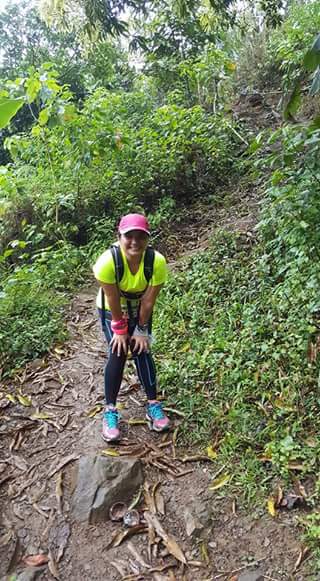 I am a type 2 diabetic.  I run to keep my blood sugars in good control in conjunction with diet and medical regimen.  The running bug got me in 2010. Since I laced up my running shoes, I’ve been an on-road runner, albeit with several months of hiatus in the last 2 years.  After almost 7 years of on-road racing, like any other runner, I want to take my running into another level by going off road.  I would like to see myself doing ultra marathons, both on and off road, in the future.  Running is my lifestyle.  I am a runner and a diabetes warrior.

Hoka Trail 201 - Photo by Glairold Recella Hoka Trail 201 gave about 200 runners a mix of talks and runs at the scenic Timberland trails...