It’s not XTrail, it it’s Easy.  Salomon Xtrail Pilipinas 2016 once again gave runners a challenging technical trail with a really long climb.  It’s a race where the best trail stories are made of. #SalomonXtrailPilipinas2016 #TrailLove

If there’s one thing I love about Salomon XTrail races is that it’s difficult.  It’s something you need to prepare for, physically and mentally.  My previous races had me finishing on an empty tank and this year is a lot tougher with a shorter cutoff and a longer distance at 25.3 kilometers instead of 24K.  In 2016, it goes back to Subic Bay, Zambales.

The race starts at Binictican Drive and goes on 4.5 kilometers of paved roads with a total ascent of 70 meters with a rolling terrain. The route shifts to the trails of El Kabayo for another 50 meters ascent over the next 1.5 kilometers. It goes on a steep descent over the next 1 kilometer covering a descent of 110 meters. The race goes back on a steep ascent of 150 meters over single track trails for the next 1.5 kilometers. The race goes on another 4 kilometers of fire and dirt roads with an elevation gain of 220 meters to the u-turn slot at Hill 394. The route goes back on the same course from the u-turn slot.

We had to leave early in Manila to get to Subic before gunstart.  The 32 kilometer runners had their gun start at 4:45 am while we had ours at 5:10 am.   It’s always an anxious time when you are up against a vertical race with an added challenge of a cutoff.  We had a 5 hour cutoff and that’s not an easy cutoff for a 25K trail run with about 800++ meters worth of elevation gain.

There’s a 4.5 kilometer worth of roads before entering the trail at El Kabayo. This was a chance to invest some time before things get slower at the trails. It was a hot and humid morning so even at 5 am, you can already feel the heat.I took advantage of the flat terrain and the road segment to start fast on the first 1.5 kilometer. The elevation shifts to a rolling terrain over the next 3 kilometers so I pulled my pace a bit since I wanted to be fresh when I entered the trail.

The plan was to be conservative at the first half of the race since it’s mostly climbing anyway and assess if it’s worth chasing the cutoff at the u-turn slot halfway into the race. It was already bright when we entered the trails.

The trails were mostly single track route that had roots, twigs, branches, leaves, bamboo shoots and rocks on the trail. It was run-able but at the same time, caution is also important as you can easily trip on the roots, twigs and other debris. The first 1.5 kilometers on the trails were moderate climb. I went at an easy walking pace so I won’t exhaust myself on the climb.

After the climb, it was time to descend to the river.  I went on at a brisk walk pace being mindful of the uneven trail. Every time I tried to speed up, I always ended up slipping, sliding or tripping. It’s run-able but the steepness made it a bit technical so I had to opt for which sections to run and which to walk. The downward trail led to the Boton River and El Kabayo Falls.

Whenever there’s a river, expect a climb to follow. It’s actually a 5.5 kilometer climb covering about 370 meters worth of elevation gain. I had to divide this into two section. The next 1.5 kilometers were on technical and steep trails. I had to huff and puff myself up on this stretch.

Subic has a very thick forest reserve, which you can see as soon as you enter Subic.  What made this experience different was being deep inside Subic’s rich forest.  It lacked the overlooking views that some mountain trails offer but the thick forest view was really beautiful. The trail was mostly covered and you’ll barely notice the sun at  this time.

I managed to crawl my self through the steep part of the trail and finally hit the fire trails and dirt roads at kilometer 8.5.  I had to take a hydration break here and rest for a bit as the next four would be pure climbs.  There were also a lot of runners resting here.

Gearing Up for Another Climb

The next four kilometers were mostly climbs with short descents or flat areas. My strategy was just to walk it as fast as I can. I took the short descents and flat areas as recovery areas where I’d walk at a relaxed pace so I’ll be fresh on the next climb.  The next 4 kilometers felt like forever. The fire roads shifted to single track dirt roads and became a lot steeper. The toughest part was braving the last kilometer heading to the u-turn slot. It was practically a crawlfest.

The halfway point was at the top of Hill 394. It had a nice overlooking view of Subic. I was able to reach the half way point sub 2:30, which meant I had a shot at meeting the cutoff. I was assessing the course as the large part was downhill except kilometer 18 and 19, which were steep ascents. I made my way down the hill doing run walk sets to speed up without straining my knees. I had to stop shortly at Kilometer 14 to assist a 32K runner who had cramps. I tried to help him loosen up the tightness. He told me, he wanted to rest it off a bit. After I left, I told one of the Marshall who I saw after a few meters to assist the runner. I went on to continue on the trail and stopped and rest at each hydration station. 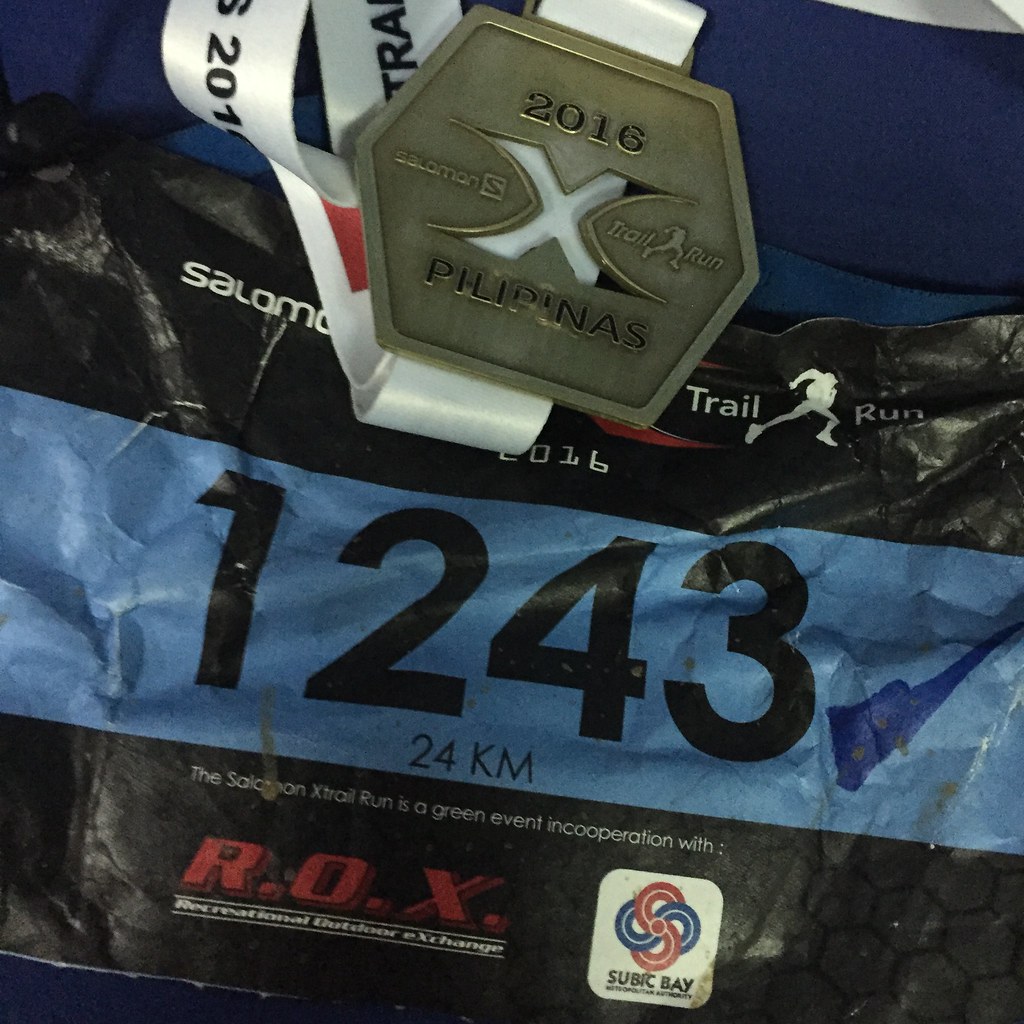 I was able to speed up going to the water station at kilometer 16.5. The trails then shifted back to single track and technical trails. I went on a brisk walking pace with a few runs in between. I was also reserving my energy for the climb at kilometer 18 and 19.

Kilometer 18 and 19 was the toughest part with long stretch of steep climbs and technical trails.  This was also my slowest part of the race as I had to stop once in a while to catch my breath. The climb felt endless.  After being several hours in the trails, fatigue sets in and the ascents challenges your endurance and climbing threshold. After the end of the climb, it was a straight descent heading to the road part of the race at kilometer 20.5.

The road part started on uphill stretches that gave us the feel of the hot Summer Weather in Subic. You’ll immediately notice the much harder surface of the paved roads after being in the soft trail for hours. I was brisk walking on the climbs so I was able to cover the next two kilometers at a faster pace.  I went on to do a run – walk set on the last 2.5 kilometers to reach the finish line before cut-off.  It was a hard earned medal indeed.

Gun Start - Photo by Glairold Recella Speedgoat Challenger brought more than 600 runners of all ages to feel and appreciate the...

RUN 2 ME 2018 – Race Results, Video and Photos Photo by Nil Dumayao Congratulations to all Trail runners who participated in the 4th...